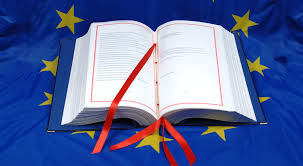 2. The EU Institutions and how they will be affected by the Reform Treaty

The European Union works through a number of EU institutions. These are:

The Reform Treaty introduces a number of changes designed to make these bodies function more effectively. The EU institutions and how they will be affected by the Reform Treaty:

The European Council consists of the Heads of State or Government of the Member States, assisted by Foreign
Ministers, together with its President and the President of the European Commission. It is responsible for major policy decisions.

At present, the role of the European Council is loosely defined and is it chaired by the Head of State or Government of the country holding the rotating six-month Presidency of the European Union.

Under the Reform Treaty, the role of the European Council is defined and becomes a full EU institution.

The main task of the President of the European Council, which is not a decision-making role, will be to prepare the Council’s work, ensure continuity and seek consensus within the Council.

II. The Council of Ministers

The Council of Ministers consists of representatives of the EU’s member governments. Under the Reform Treaty, the Council will continue to share law-making power with the European Parliament and will maintain its central role in the foreign and security policy area, and in coordinating economic policies.

The main change is that new voting arrangements will come into effect from 2014. These are designed to make the work of the Council of Ministers more efficient.

The new system requires that proposals will normally need to have the support of a majority (55%) of EU Member States representing at least 65% of the EU’s population.

The new Treaty will make this system of qualified majority voting the norm when decisions are being taken by the Union, except where the EU Treaties require a different procedure (e.g. a unanimous vote).

Important policy areas for Ireland such as taxation and defence will continue to require a unanimous vote.

One of the three Member States in each team will chair all meetings of the Council of Ministers, except those concerned with Foreign Affairs, for a six-month period with …